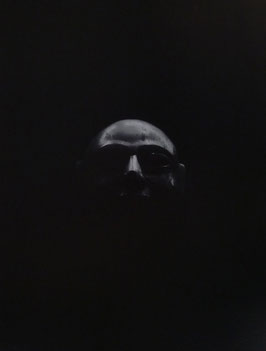 Anja Ronacher is the prize-winner of the 2015 Förderpreis, awarded by the Salzburger Kunstverein, and exhibited each following year in the Kabinett. This exhibition includes recent photographs, where the artist has photographed objects, often artefacts, found in museums around the world. These analogue photographs may appear almost anachronistic today when we have nearly only digital images about.

The process itself is contemplative, where she makes significant dark-room manipulation of the images in order to achieve the desired effect. This process is the artist’s attempt to take them out of their

museum context and return them, as she says ―to ritual, to art, to ignorance, to a deeper,older knowledge; to an inner experience grounded neither in existence nor rationality.

The artist has alluded to the writings of George Bataille as an influence in her process of selecting, photographing and finally producing and exhibiting these haunting photographs.

I had this reference in mind when I went to visit Anja in her studio in the fourteenth district in Vienna. Tucked behind the Hütteldorferstrasse U-bahn station, in a grey, dull building with cold staircases, her studio itself was small but practical. Most of its modest space was set aside as a darkroom that she fashioned herself. If she were not awaiting me in the hall,a cigarette burning between her fingers, I likely would have passed the entrance, as the doorway was like an after-thought. Inside an intermingled smell of old and fresh cigarette smoke lingered within an overall acrid smell of photographic chemicals. When one enters the first section of the dark studio, as small as a walk-in closet, one immediately meets a

row of development trays. One must then squeeze past them through another black door into the main studio section, itself barely 15 square meters in size. There were no windows to be seen. Here in this tiny and very cold studio, her photos sat like flattened crows on her small work table, adjacent to an older, slightly battered enlarger. A few un-marked boxes sat begrudgingly on wooden shelves, but otherwise the studio seemed emptied of distractions, so that Ronacher develops, enlarges and prints her photos alone in this cold darkness.

We examined the photographs together and she explained their origins to me. Each picture depicts a single object, which is surrounded by darkness, which is literally burned into the photograpic paper by dodging with the enlarger. This is an old photogram technique, used by the likes of Man Ray and the Surrealists (and many others subsequently), which here thus dramatically casts the image into a pool of blackness.

Each object, itself a relic of time long past, thus faces the viewer like a bruised, faded jewel encrusted within a sea of nothingness.

We know, for example from Roland Barthes, that inherent to photography is its tendency and necessity to reproduce and depict a moment of time passed, a moment that can never return. This moment is paradoxically presented to us within an indexical image on a piece of paper: The time passed magically appears before us again. These depicted objects in her photos have also been indexically reproduced, naturally, but the sense of time passed, of a greater, unknown time contained within these objects that were made centuries ago, is

also heightened by Ronacher’s process of image-making. That is, the form of these images, the form of these things that we see, both emerges out towards us from the photographs and simultaneously recedes from us as recognizable forms. If we were to see photographs of a human face, even from someone long dead, this would at least have a sense of familiarity and kinship to it. Here, these forms – nearly all from an unknown past explored by the sciences of archaeology and anthropology – cannot be known to us. The images actually collude with and reveal a greater darkness that surrounds and, ultimately,is within and behind human consciousness.

George Bataille toyed around with such concepts of the unknown, using the term l’informe (formlessness) to precisely capture how imprecise meaning is when held up to the light (or emerges within the darkness). It is thus no surprise that the artist has been conscious of his thinking while making these works.
Indeed they appear infected by this very thought. The figures we see in Ronacher’s photographs vary from different time periods and genres. We see an inscribed jug, from 9th Century Iran, which she photographed in The Louvre, Paris. There is an Etruscan hand cast in silver from the Villa Guilia in Rome, dating from about 650 BC. These hands, the artist learned, had once been part of a sphyrelaton, a wooden funerary dummy that represented the dead and would then guard the soul after cremation. Another photo depicts a drinking vessel from Mexico, photographed in the Ethnologisches Museum in Berlin. We also see the relief of a tree made from linden wood, dating from 1515 and photographed in the Berlin Bode Museum. Another vessel from
Mexico was photographed in the Ethnologisches Museum Berlin, and then another in the Gansu Provincial Museum in Lanzhou, China, Neolithikum. Ronacher also shot a human mask from Caijiaping, Tianshui, Gansu Province, unearthed in 1967. Such kind of masks were mostly found on the head of the corpses when excavated. This mask was allegedly bored into to make four holes, indicating that it was originally nailed over the coffin, in the hope of warding off evil spirits. There is another photographed vessel, from the National Museum of Mali in Bamako, and lastly, very curiously, there is an image of a bronze
sculpture entitled Heart, made by Louise Bourgeois in 1970.

Instead of trying to find something in common with these forms, a commonness is made by the artist by encasing them within this elegant photographic technique. We might posit that this process is rather a means to say that an ethnographic science or an order of things focused upon this vast cosmos of ours is itself ultimately bathed in darkness. This is not a pessimistic sentiment rather one that, on the one hand, casts doubt upon the nonending tendency of humankind to categorise and rationalise. On the other hand, the artist is perhaps much more interested in radical thinking which foregoes or even springs out of these kinds of categorical knowledge-production, that which itself is immersed within doubt as a productive engine. We might find that dense notions emerging from the writings of Bataille, or those in conceptual fellowship with him, from Nietzche to Foucault, have a sort of homecoming in these images.

The past is here in dark shadows and never to be re-gained. The passing of time is entwined with the appearance of the dead in these photographs, where the association of a form of knowledge such as archaeology to explain all this is, as Foucault states, wiped out like the lines of sand on a beach overcome by waves of the sea. Where the gnostics held the darkness of night and our accompanying dreams to be the world of reality, and daytime then a dream spun by the trickery of the gods, these photos have an akin spirit;they are against all the promises and trickery of splendour and the neon heaven of
contemporary reality. Perhaps they also hint that within each of us is a black bull of dark knowledge that may also arise in twisted, terrible forms and bring about cruel, senseless acts. Thus we might here note the relevance and seeming inevitability of the recent political turbulences from Central Europe to America where political identities attempt to grapple with or even surrender to these dark urges.


In The Archaeology of Knowledge, Michel Foucault posits that thought and knowledge are themselves ruled by forces beyond our control. Ever vulnerable is an eruption of ideas, a breakdown of systems and or an erasure of shared beliefs. At the heart of this ongoing potential for tumult we might glimpse again this Bataillean notion of l’informe, a kind of spinning formlessness, “like spit or a crushed spider,” where something may be seen but its meaning does not hold. While arising from the technological and categorical science of photography, these pictures simultaneously give us a glimpse into a dark hole buried
beneath the swell of collective perception. Looking at them is like looking into the beedy
eyes of a crow, which looks back, but certainly not in a manner we are accustumed to.

This is a contemporary art online shop for art prints, books, art posters, and artworks. The gallery was founded in 1971 by Dr. Ursula Krinzinger.